You want to add pod 'RNRippleTableView', '~> 0.1' similar to the following to your Podfile:

I created this control from a couple posts on Dribbble by Boris Valusek out of pure curiosity. I really wanted to nail the shadow animations as well as a bounce effect that followed diminishing return rules on amplitude as well as plausible timing. Take a look at some screens and animations.

To enable Anti-Aliasing you'll need to set the UIViewEdgeAntialiasing key to YES in your Info.plist. Doing so will impact performance, but if you're an optimizer you'll end up with good performance and sweet, sweet line edges like this: 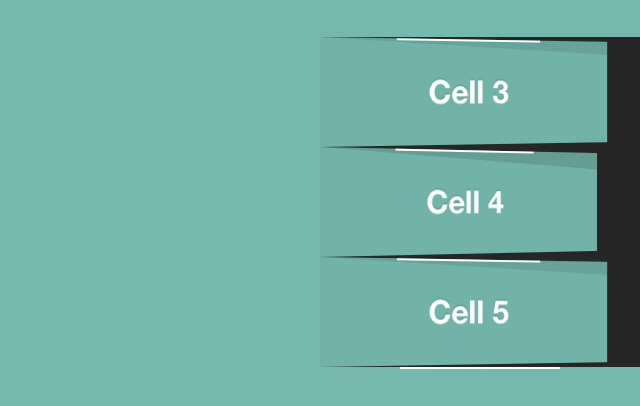 The preferred method of installation is through CocoaPods. Just add the following to your Podfile:

Or if you want to install manually, drag both RNRippleTableView's .h and .m into your project. You'll need to ensure that the QuartzCore framework is included.

Optionally, you'll need to add the following code to any view controllers using RNRippleTableView to have ripple animations on shake gestures.

To use RNRippleTableView, simply add to your controller and lay it out just as you would any other view. Connect a datasource and delegate in a similar fashion to UITableView. You must also register the class that will be used as the table cells. This class should be a class or subclass of UIView.

Setup your cells just like you would with UITableView except without any of the identifier and checking for nil parts, that is handled for you.

RNRippleTableView comes with a small set of options to customize the appearance and animations.

Toggle rippling on and off.

Determines the anchor point for cells. Also determines which side of the view is animated as well as the direction that the shadow is drawn.

The number of adjacent cells that are rippled.

The angle at which the epicenter of the ripple animates its rotation to in degrees.

The time for a single bounce animation to complete in seconds.

The timing delay between bounce animations in seconds that gives the entire ripple animation its delay effect. Faster looks more like a burst while slower looks like water.

Determines if the previous view casts a shadow on the animated view.

Determines if the entire view is shaded as it bounces.

Optionally you can animate small ripples on shake gestures with the device. This was a fun feature I added just because.

Boris Valusek was the creator behind this idea on Dribbble. All credit for originality goes to him.

If you've used this project in a live app, please let me know! Nothing makes me happier than seeing someone else take my work and go wild with it.