This library is deprecated, it is recommended you look at Mapbox-iOS-SDK.

Based on the Route-Me iOS map library (Alpstein fork) with Mapbox customizations. 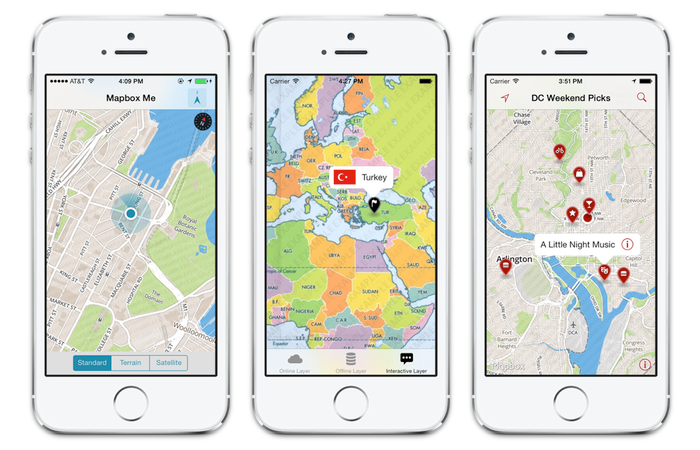 Route-Me is an open source map library that runs natively on iOS. It's designed to look and feel much like the built-in iOS map library, but it's entirely open, and works with any map source using a pluggable backend system.

Please note that you are responsible for getting permission to use the map data, and for ensuring your use adheres to the relevant terms of use.

There are three ways that you can install the SDK, depending upon your needs:

More detailed information on the installation options is available in the SDK guide.

The two main branches of the GitHub repository are pretty self-explanatory: release and develop. When we tag a release, we also merge develop over to release, except in the case of minor point releases (e.g., 0.4.2), where we might just bring over a fix or two from develop.

Then, update the submodules:

Some example apps showing usage of the SDK (with screenshots):

There are two subdirectories - MapView and Proj4. Proj4 is a support library used to do map projections. The MapView project contains only the Route-Me map library.

See License.txt for license details. In any app that uses this SDK, include the following text on your "preferences" or "about" screen: "Uses Mapbox iOS SDK, (c) 2008-2013 Mapbox and Route-Me Contributors". Your data provider will have additional attribution requirements.

Complete API documentation is available online or as an Xcode docset Atom feed.

The Mapbox iOS SDK has a support resource where you can open cases and browse other developers' discussions about use of the SDK.

We have a basic technical overview along with the installation instructions.

Mapbox has an IRC channel on irc.freenode.net in #mapbox.

To report bugs and help fix them, please use the issue tracker.

The Mapbox iOS SDK makes use of several sub-libraries, listed below. See License.txt for more detailed information about Route-Me and Proj4 and see the individual license files in the sub-libraries for more information on each.