You want to add pod 'IOSLinkedInAPI', '~> 2.0' similar to the following to your Podfile: 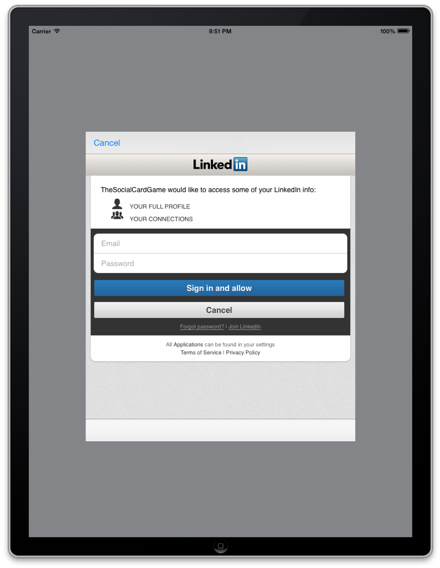 Why yet another LinkedIn library? Although there already exists a couple of iOS libraries which is wrapping the LinkedIn API, none of them (at least to my knowledge) is using OAuth2 which is the preferred protocol according to LinkedIn.

How To Get Started

The library can be fetched as a Pod from cocoapods

If you aren't using Cocoapods you can always download the libary and import the files from the folder IOSLinkedInAPI into your existing project.

Afterwards the client can be used to retrieve an accesstoken and access the data using the LinkedIn API:

The code example retrieves an access token and uses it to get userdata for the user which granted the access. The cancel callback is executed in case the user actively declines the authorization by pressing cancel button in the UIWebView (see illustration above). The failure callbacks is executed in case either the of the steps fails for some reason.

It uses the cocoapods. Just run 'pods install' in the directory after your clone and you should be able to run the app afterwards

The library is currently handling the authentication and authorization. I would like to improve the libary to also make it easy to do the actually API calls. My current thought is to let the client remember the accessToken after it is retrieved and afterwards automatically append it to futher calls along with the format=json GET parameter.

If you have ideas of how that could be implemented let me know.