With the recent introduction of Combine and SwiftUI, we will face some transition periods in our code base. Our applications will use both Combine and a third-party reactive framework, or both UIKit and SwiftUI, which makes it potentially difficult to guarantee a consistent architecture over time.

Spin is a tool to build feedback loops within a Swift based application allowing you to use a unified syntax whatever the underlying reactive programming framework and whatever Apple UI technology you use (RxSwift, ReactiveSwift, Combine and UIKit, AppKit, SwiftUI).

Please dig into the Demo applications if you already feel comfortable with the feedback loop theory.

Please read the CHANGELOG.md for information about evolutions and breaking changes.

What is a State Machine?

It's an abstract machine that can be in exactly one of a finite number of states at any given time. The state machine can change from one state to another in response to some external inputs. The change from one state to another is called a transition. A state machine is defined by a list of its states, its initial state, and the conditions for each transition

Guess what! An application IS a state machine.

We just have to find the right tool to implement it. This is where feedback loops come into play .

A Feedback Loop is a system that is able to self-regulate by using the resulting value from its computations as the next input to itself, constantly adjusting this value according to given rules (Feedback Loops are used in domains like electronics to automatically adjust the level of a signal for instance).

Stated this way might sound obscur and unrelated to software engineering, BUT “adjusting a value according to certain rules” is exactly what a program, and by extension an application, is made for! An application is the sum of all kinds of states that we want to regulate to provide a consistent behaviour following precise rules.

Feedback loops are perfect candidates to host and manage state machines inside an application.

Spin is a tool whose only purpose is to help you build feedback loops called "Spins". A Spin is based on three components: an initial state, several feedbacks, and a reducer. To illustrate each one of them, we will rely on a basic example: a “feedback loop / Spin” that counts from 0 to 10.

Feedbacks are the only place where you can perform side effects (networking, local I/O, UI rendering, whatever you do that accesses or mutates a state outside the local scope of the loop). Conversely, a reducer is a pure function that can only produce a new value given a previous one and a transition request. Performing side effects in reducers is forbidden, as it would compromise its reproducibility.

In real life applications, you can obviously have several feedbacks per Spin in order to separate concerns. Each of the feedbacks will be applied sequentially on the input value.

The multiple ways to build a Spin

Spin offers two ways to build a feedback loop. Both are equivalent and picking one depends only on your preference.

The following example will rely on RxSwift, here are the ReactiveSwift and Combine counterparts; you will see how similar they are.

We will need a data type for our state:

We will also need a data type to describe the transitions to perform on Levels:

Now we can write the two feedbacks that will have an effect on each level:

And finally to describe the state machine ruling the transitions, we need a reducer:

In that case, the “Spinner” class is your entry point.

That’s it. The feedback loop is built. What now?

If you want to start it, then you have to subscribe to the underlying reactive stream. To that end, a new operator “.stream(from:)” has been added to Observable in order to connect things together and provide an Observable you can subscribe to:

There is a shortcut function to directly subscribe to the underlying stream:

For instance, the same Spin using Combine would be (considering the effects return AnyPublishers):

In this case we use a "DSL like" syntax thanks to Swift 5.1 function builder:

The way to start the Spin remains unchanged.

The multiple ways to create a Feedback

As you saw, a “Feedback loop / Spin” is created from several feedbacks. A feedback is a wrapper structure around a side effect function. Basically, a side effect has this signature (Stream<State>) -> Stream<Event>, Stream being a reactive stream (Observable, SignalProducer or AnyPublisher).

As it might not always be easy to directly manipulate Streams, Spin comes with a bunch of helper constructors for feedbacks allowing to:

Please refer to FeedbackDefinition+Default.swift for completeness.

There are typical cases where a side effect consist of an asynchronous operation (like a network call). What happens if the very same side effect is called repeatedly, not waiting for the previous ones to end? Are the operations stacked? Are they cancelled when a new one is performed?

Well, it depends . By default, Spin will cancel the previous operation. But there is a way to override this behaviour. Every feedback constructor that takes a State as a parameter can also be passed an ExecutionStrategy:

Choose wisely the option that fits your needs. Not cancelling previous operations could lead to inconsistency in your state if the reducer is not protected against unordered events.

Reactive programming is often associated with asynchronous execution. Even though every reactive framework comes with its own GCD abstraction, it is always about stating which scheduler the side effect should be executed on.

Spin provides a way to specify this scheduler for each feedback you add to a loop while still being as declarative as possible:

Of course, it remains possible to handle the Schedulers by yourself inside the feedback functions.

Please note that reducers are executed on default schedulers to handle things like reentrancy or handling events in a serial way. This behaviour can be overridden by passing a custom scheduler to the Reducer you create.

Using Spin in a UIKit or AppKit based app

Although a feedback loop can exist by itself without any visualization, it makes more sense in our developer world to use it as a way to produce a State that we be rendered on screen and to handle events emitted by the users.

Fortunately, taking a State as an input for rendering and returning a stream of events from the user interactions looks A LOT like the definition of a feedback (State -> Stream<Event>), we know how to handle feedbacks , with a Spin of course.

As the view is a function of a State, rendering it will change the states of the UI elements. It is a mutation exceeding the local scope of the loop: UI is indeed a side effect. We just need a proper way to incorporate it in the definition of a Spin.

Once a Spin is built, we can “decorate” it with a new feedback dedicated to the UI rendering/interactions. A special type of Spin exists to perform that decoration: UISpin.

As a global picture, we can illustrate a feedback loop in the context of a UI with this diagram: 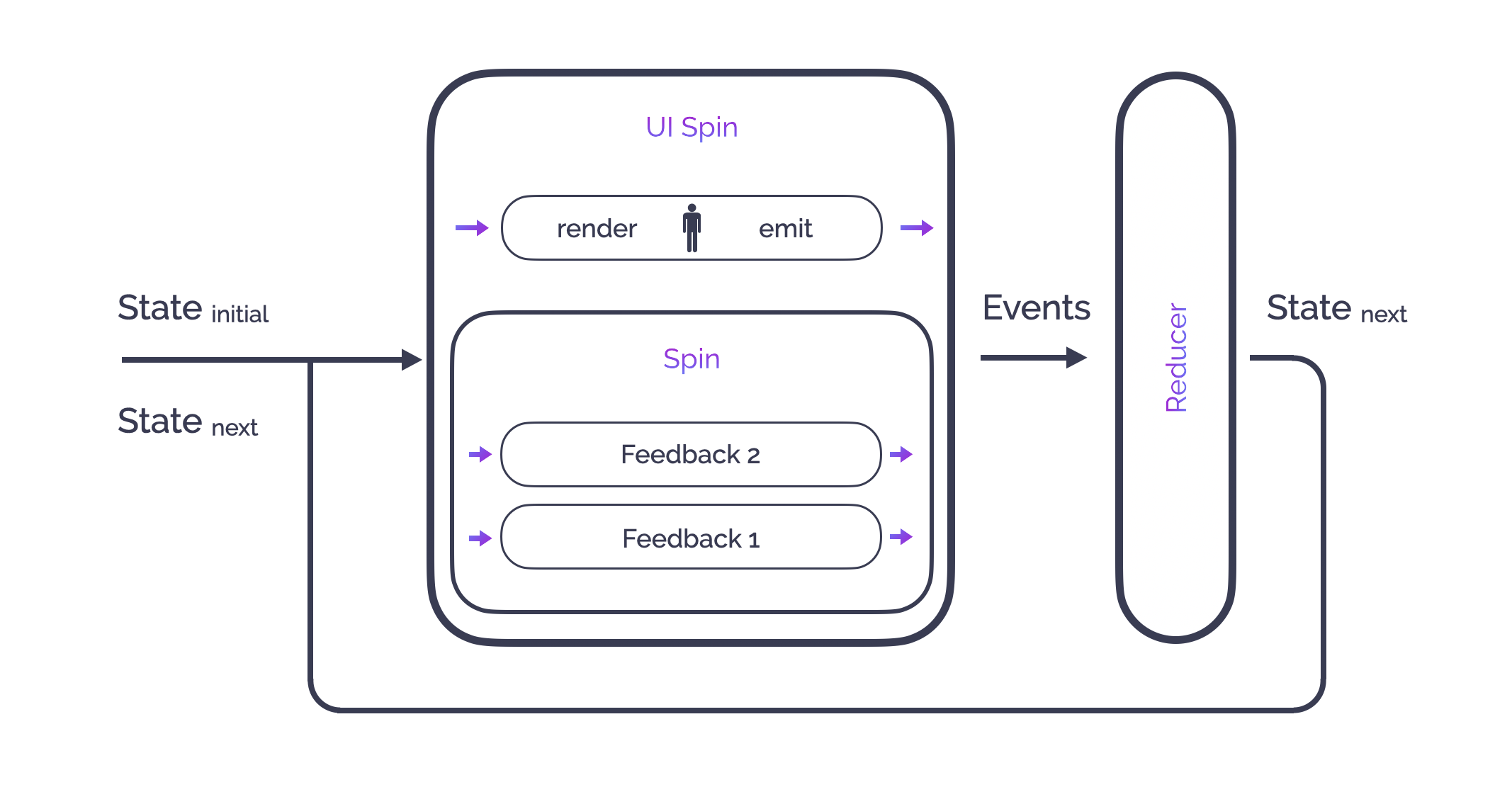 In a ViewController, let’s say you have a rendering function like:

We need to decorate the “business” Spin with a UISpin instance variable of the ViewController so their lifecycle is bound:

And once the view is ready (in “viewDidLoad” function for instance) let’s start the loop:

or a shortest version:

Sending events in the loop is very straightforward; simply use the emit function:

Using Spin in a SwiftUI based app

Because SwiftUI relies on the idea of a binding between a State and a View and takes care of the rendering, the way to connect the SwiftUI Spin is slightly different, and even simpler.

In your view you have to annotate the SwiftUI Spin variable with “@ObservedObject” (a SwiftUISpin being an “ObservableObject”):

you can then use the “uiSpin.state” property inside the view to display data and uiSpin.emit() to send events:

A SwiftUISpin can also be used to produce SwiftUI bindings:

\.isPaused is a keypath which designates a sub state of the state, and .toggle is the event to emit when the toggle is changed.

As stated in the introduction, Spin aims to ease the cohabitation between several reactive frameworks inside your apps to allow a smoother transition. As a result, you may have to differentiate a RxSwift Feedback from a Combine Feedback since they share the same type name, which is Feedback. The same goes for Reducer, Spin, UISpin and SwiftUISpin.

By using those typealiases, it is safe to use all the Spin flavors inside the same source file.

All the Demo applications use the three reactive frameworks at the same time. But the advanced demo application is the most interesting one since it uses those frameworks in the same source files (for dependency injection) and take advantage of the provided typealiases.

In the Spinners organization, you can find 2 demo applications demonstrating the usage of Spin with RxSwift, ReactiveSwift, and Combine.

Warning: it seems that the StarWars API is no longer accessible. As a result, the "advanced" demos are not able to display data anymore. You can still read the code to see how Spin is used. A replacement API will be implemented shortly.

Add this URL to your dependencies:

Add the following entry to your Cartfile:

The advanced demo applications use Alamofire for their network stack, Swinject for dependency injection, Reusable for view instantiation (UIKit version) and RxFlow for the coordinator pattern (UIKit version).

The following repos were also a source of inspiration: