You want to add pod 'SYEmojiPopover', '~> 0.1' similar to the following to your Podfile:

After cloning the project please run:

It consists in two classes:

SYEmojiCharacters generates a list of Emoji characters separated in sections, depending on the iOS version the phone is running. I used iOS Emji keyboard to list those characters in the file Characters/characters.txt. It contains Emoji characters shown by iOS keyboard starting from 5.0, and characters supported by the OS even if they are not in this keyboard.

It contains the following methods:

The second class, SYEmojiPopover, is the popover view. The popover in itslef is made by NicolasChengDev and can be found here: WYPopoverController. The view in the popover is implemented with UITableView. It is much quicker than GMGridView that you may find in previous versions, but the ability to change the size of the control is a little bit harder, explaining why it hasn't been implemented yet.

Here are the methods you can use:

The delegate property implements SYEmojiPopoverDelegate, consisting in those methods: 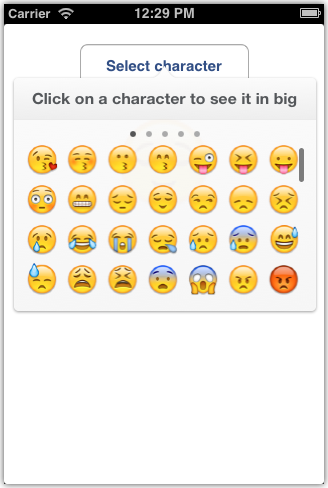 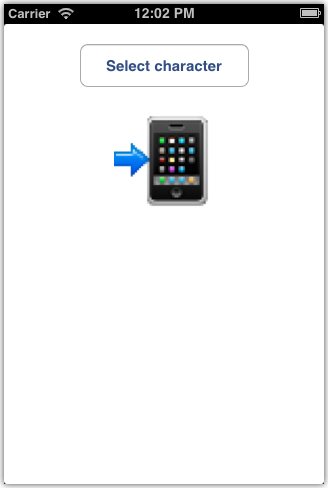 A sample project is included along with the sources. It consists in a simple project showing the popover and displaying character after a click.

The instance to the popover is a private member of the main view controller:

When clicking on the button:

The repo also contains a simple OSX app. Its goal is to create the -(void)loadCharacters method of SYEmojiCharacters using a text file - mine is the Characters/characters.txt file.

The text file uses a home made structure, respect it carefully in order to get the app working.

I included it to have it along with this project on the same repo, but it will only be useful for those of you who want to add characters or organize sections differently.

Any contribution of any sort is warmly welcomed, so if you have any question, suggestion or bug report please do not hesitate to contact me on Github, it will be more than a pleasure to answer you.

If you app is using this code please contact me so I can add it to a list of app for people to see this project.

I do not really know licenses, so I won't give one precisely. I will just specify some rules I think fair:

I hope you'll enjoy it,