You want to add pod 'SWRevealViewController', '~> 2.3' similar to the following to your Podfile:

A UIViewController subclass for revealing a rear (left and/or right) view controller behind a front controller, inspired by the Facebook app, done right!

This version incorporates a new approach to Story Boards support.

A number of changes have been made on version 2.0 that may break your existing project. In case you are not ready to upgrade you can continue using previous versions. The last commit before 2.0.0 was tagged v1.1.3. The important changes that affect 2.0.0 are described next. 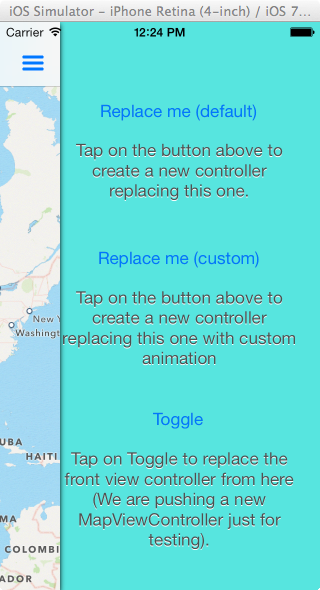 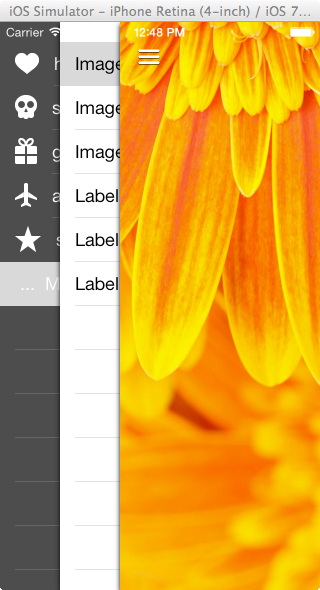 The SWRevealViewController repository attempts to provide an updated cocoaPods file and consistent tag versioning, but it is not actively updated on the cocoapods-specs repository.

The easiest way to install it is by copying the following to your project:

Other methods are documented in the SWRevealViewController.h header file.

As of November 15, 2013 Release Notes are updated on the class main header file. Please see SWRevealViewController.h

Thanks to Jesper Vandborg for having contributed with a Xamarin Binding project for this controller that is available for download at https://github.com/Vandborg/SWRevealViewController-XamarinBinding.

A Special Thank you to Joan Martin who formely worked at http://www.sweetwilliamsl.com and has recently been developing an app for http://www.citizen.tv. He had the original idea and implemented code for generic view deployment/undeployment and replacement of view controllers used in the class.

Permission is hereby granted, free of charge, to any person obtaining a copy of this software and associated documentation files (the "Software"), to deal in the Software without restriction, including without limitation the rights to use, copy, modify, merge, publish, distribute, sublicense, and/or sell copies of the Software, and to permit persons to whom the Software is furnished to do so, subject to the following conditions:

The above copyright notice and this permission notice shall be included in all copies or substantial portions of the Software.

THE SOFTWARE IS PROVIDED "AS IS", WITHOUT WARRANTY OF ANY KIND, EXPRESS OR IMPLIED, INCLUDING BUT NOT LIMITED TO THE WARRANTIES OF MERCHANTABILITY, FITNESS FOR A PARTICULAR PURPOSE AND NONINFRINGEMENT. IN NO EVENT SHALL THE AUTHORS OR COPYRIGHT HOLDERS BE LIABLE FOR ANY CLAIM, DAMAGES OR OTHER LIABILITY, WHETHER IN AN ACTION OF CONTRACT, TORT OR OTHERWISE, ARISING FROM, OUT OF OR IN CONNECTION WITH THE SOFTWARE OR THE USE OR OTHER DEALINGS IN THE SOFTWARE.