FLEX (Flipboard Explorer) is a set of in-app debugging and exploration tools for iOS development. When presented, FLEX shows a toolbar that lives in a window above your application. From this toolbar, you can view and modify nearly every piece of state in your running application.

Give Yourself Debugging Superpowers

Unlike many other debugging tools, FLEX runs entirely inside your app, so you don't need to be connected to LLDB/Xcode or a different remote debugging server. It works well in the simulator and on physical devices.

In the iOS simulator, you can use keyboard shortcuts to activate FLEX. f will toggle the FLEX toolbar. Hit the ? key for a full list of shortcuts. You can also show FLEX programmatically:

FLEX itself does not support tvOS out of the box. However, others have taken it upon themselves to port FLEX to tvOS. If you need tvOS support, seek out one of these forks. Here is one such fork.

Once a view is selected, you can tap on the info bar below the toolbar to present more details about the view. From there, you can modify properties and call methods.

When enabled, network debugging allows you to view all requests made using NSURLConnection or NSURLSession. Settings allow you to adjust what kind of response bodies get cached and the maximum size limit of the response cache. You can choose to have network debugging enabled automatically on app launch. This setting is persisted across launches.

All Objects on the Heap

FLEX queries malloc for all the live allocated memory blocks and searches for ones that look like objects. You can see everything from here.

If you get your hands on an arbitrary address, you can try explore the object at that address, and FLEX will open it if it can verify the address points to a valid object. If FLEX isn't sure, it'll warn you and refuse to dereference the pointer. If you know better, however, you can choose to explore it anyway by choosing "Unsafe Explore"

Default keyboard shortcuts allow you to activate the FLEX tools, scroll with the arrow keys, and close modals using the escape key. You can also add custom keyboard shortcuts via -[FLEXManager registerSimulatorShortcutWithKey:modifiers:action:description] 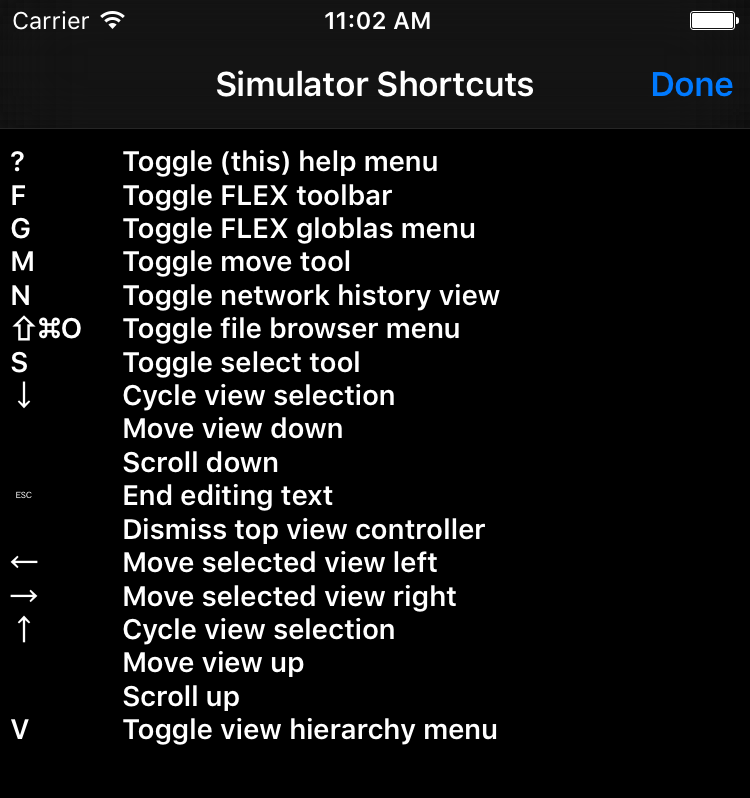 View the file system within your app's bundle or sandbox container. FLEX shows file sizes, image previews, and pretty prints .json and .plist files. You can rename and delete files and folders. You can "share" any file if you want to inspect them outside of your app.

SQLite database files (with either .db or .sqlite extensions), or Realm database files can be explored using FLEX. The database browser lets you view all tables, and individual tables can be sorted by tapping column headers.

3D Touch in the Simulator

Using a combination of the command, control, and shift keys, you can simulate different levels of 3D touch pressure in the simulator. Each key contributes 1/3 of maximum possible force. Note that you need to move the touch slightly to get pressure updates.

Go digging for all things public and private. To learn more about a class, you can create an instance of it and explore its default state. You can also type in a class name to jump to that class directly if you know which class you're looking for.

FLEX allows you to edit defaults that are any combination of strings, numbers, arrays, and dictionaries. The input is parsed as JSON. If other kinds of objects are set for a defaults key (i.e. NSDate), you can view them but not edit them.

Learning from Other Apps

The code injection is left as an exercise for the reader.

FLEX requires an app that targets iOS 9 or higher. To run the Example project, open a Terminal window in the Example/ folder and run pod install, then open the generated workspace.

FLEX is available on CocoaPods. Simply add the following line to your podfile:

Add the following to your Cartfile:

If you're using Buck, you may want to silence some of the warnings emitted by FLEX. You will need to build FLEX as an apple_library and pass the -Wno-unsupported-availability-guard flag, as well as the other warning flags below to disable any other warnings FLEX may have.

Manually add the files in Classes/ to your Xcode project, or just drag in the entire FLEX/ folder. Be sure to exclude FLEX from Release builds or your app will be rejected.

Add the following flags to to Other Warnings Flags in Build Settings:

Include the dependency in the depdendencies value of your Package.swift

Next, include the library in your target:

FLEX makes it easy to explore the internals of your app, so it is not something you should expose to your users. Fortunately, it is easy to exclude FLEX files from Release builds. The strategies differ depending on how you integrated FLEX in your project, and are described below.

Wrap the places in your code where you integrate FLEX with an #if DEBUG statement to ensure the tool is only accessible in your Debug builds and to avoid errors in your Release builds. For more help with integrating FLEX, see the example project.

CocoaPods automatically excludes FLEX from release builds if you only specify the Debug configuration for FLEX in your Podfile: 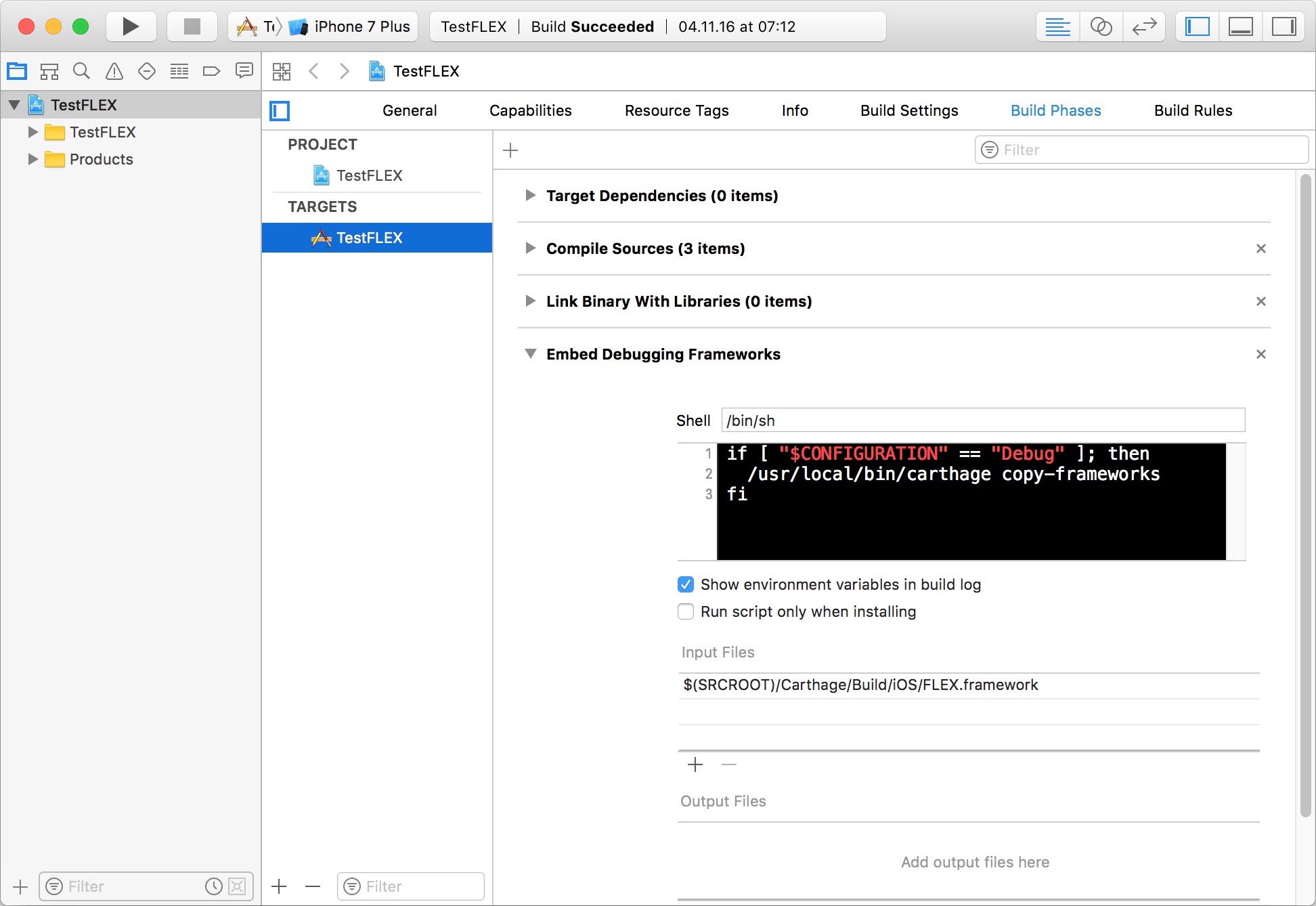 In Xcode, navigate to Build Settings > Build Options > Excluded Source File Names. For your Release configuration, set it to FLEX* like this to exclude all files with the FLEX prefix:

In Xcode, navigate to Build Settings > Build Options > Excluded Source File Names. For your Release configuration, set it to FLEX* like this to exclude all files with the FLEX prefix:

FLEX builds on ideas and inspiration from open source tools that came before it. The following resources have been particularly helpful: