Think of Aspects as method swizzling on steroids. It allows you to add code to existing methods per class or per instance, whilst thinking of the insertion point e.g. before/instead/after. Aspects automatically deals with calling super and is easier to use than regular method swizzling.

This is stable and used in hundreds of apps since it's part of PSPDFKit, an iOS PDF framework that ships with apps like Dropbox or Evernote, and now I finally made it open source.

Adding aspects returns an opaque token of type AspectToken which can be used to deregister again. All calls are thread-safe.

Aspects uses Objective-C message forwarding to hook into messages. This will create some overhead. Don't add aspects to methods that are called a lot. Aspects is meant for view/controller code that is not called 1000 times per second.

When to use Aspects

If we implemented the above requirements using regular OO there'd be some drawbacks:

Good OO says a class should have a single responsibility, however adding on extra cross-cutting requirements means a class that is taking on other responsibilites. For example you might have a StoreClient that supposed to be all about making purchases from an online store. Add in some cross-cutting requirements and it might also have to take on the roles of logging, security and recommendations. This is not great:

Here are some concrete examples:

Aspects can be used to dynamically add logging for debug builds only:

It can be used to greatly simplify your analytics setup: https://github.com/orta/ARAnalytics

You can check if methods are really being called in your test cases:

It can be really useful for debugging. Here I was curious when exactly the tap gesture changed state:

Another convenient use case is adding handlers for classes that you don't own. I've written it for use in PSPDFKit, where we require notifications when a view controller is being dismissed modally. This includes UIKit view controllers like MFMailComposeViewController or UIImagePickerController. We could have created subclasses for each of these controllers, but this would be quite a lot of unnecessary code. Aspects gives you a simpler solution for this problem:

Aspects identifies itself nicely in the stack trace, so it's easy to see if a method has been hooked: 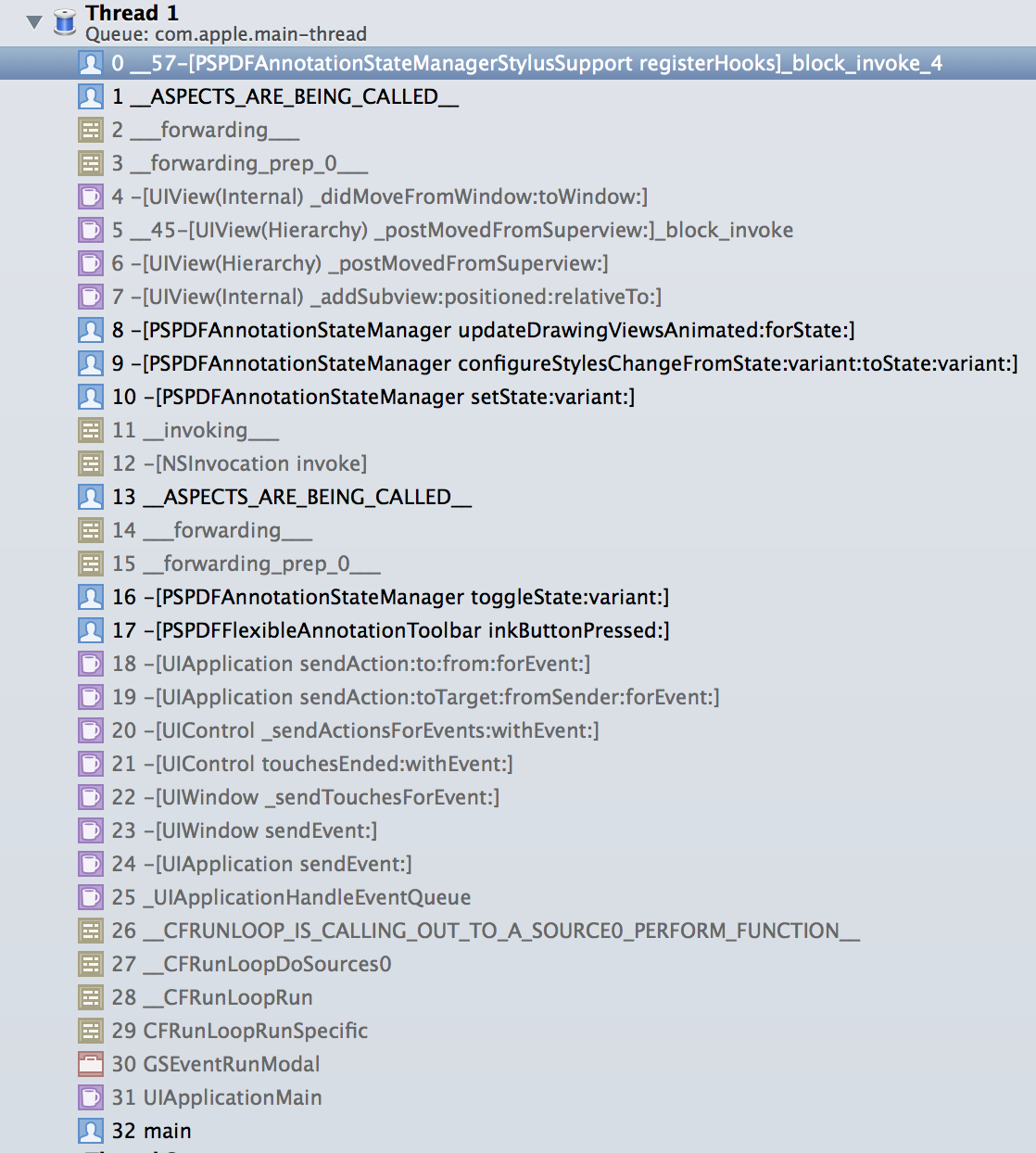 You can use the invocation object to customize the return value:

The simplest option is to use pod "Aspects".

You can also add the two files Aspects.h/m. There are no further requirements.

Aspects uses quite some runtime trickery to achieve what it does. You can mostly mix this with regular method swizzling.

An important limitation is that for class-based hooking, a method can only be hooked once within the subclass hierarchy. See #2 This does not apply for objects that are hooked. Aspects creates a dynamic subclass here and has full control.

KVO works if observers are created after your calls aspect_hookSelector: It most likely will crash the other way around. Still looking for workarounds here - any help apprechiated.

Because of ugly implementation details on the ObjC runtime, methods that return unions that also contain structs might not work correctly unless this code runs on the arm64 runtime.

The idea to use _objc_msgForward and parts of the NSInvocation argument selection is from the excellent ReactiveCocoa from the GitHub guys. This article explains how it works under the hood.